The Shamrock, St. Patrick and The Trinity 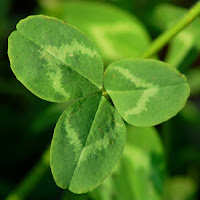 The following quote shows how the great symbol of St. Patrick and St. Patrick's Day (the shamrock or clover) was used to explain the Trinity:

"The doctrine of Three Gods in One, each separate and distinct, yet each totally God, is claimed by Christians to be a mystery and is accepted on faith. In trying to teach his converts about the trinity, St. Patrick held up a shamrock explaining that the three leaves represented the Father, the Son, and the Holy Spirit, while the stem was the Godhead itself from which they proceeded. This is said to be the origin of the use of the shamrock which is customarily worn on St. Patrick's Day.

"Scholars have discovered that the shamrock, or trefoil, was initially used in ancient Celtic fertility rites. It represented a triad of goddesses..." - pp. 79-80, Celebrations - The Complete Book of American Holidays, Robert J. Myers, Doubleday; Co., 1972.

Though it is clear that the shamrock was used as a symbol to explain the Trinity and represented a triad of pagan goddesses, this should in no way associate the clover itself as pagan. The history of the Trinity Doctrine certainly shows that the concept of the only true God being comprised of three persons is not a Bible teaching. It is not found in the Bible and developed gradually over several centuries after Christ.

The Trinity Has Pagan Origins

"The trinity was a major preoccupation of Egyptian theologians .... Three gods are combined and treated as a single being, addressed in the singular. In this way the spiritual force of Egyptian religion shows a direct link with Christian theology." - Egyptian Religion. (For much more, see Trinity And Pagan Influence.)

Historian Will Durant said that

"Christianity did not destroy paganism; it adopted it. . . . From Egypt came the ideas of a divine trinity."

And Arthur Weigall stated that

"Nowhere in the New Testament does the word `trinity' appear. The idea was only adopted by the Church three hundred years after the death of our Lord; and the origin of the conception is entirely pagan." - The Paganism in our Christianity, pp. 197, 198.

How Does God View Paganism?

True Christians should avoid pagan associations and view them as serious because God views these things very seriously. (Lev. 19:2) God Himself said: "You must not have any other gods against my face. Because I Jehovah your God am a God exacting exclusive devotion." (Ex. 20:1-5) NWT

Notice how exclusive the worship of God must be: "Be careful to do everything I have said to you. Do not invoke the names of other gods; do not let them be heard on your lips." - Exodus 23:13, NIVSB.
Posted by Elijah Daniels at 6:04 PM

When using the Lijit search box, click on the "Network" tab for even more results.
Lijit Search
Subscribe to: Posts (Atom)

Sciptures Showing That Jesus Was Created (With Quotes & Comments)